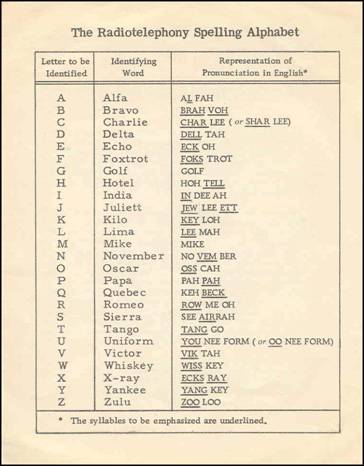 The letters of the alphabet can be difficult to discriminate, particularly over a limited bandwidth and noisy communications channels like early telephones or radio. To overcome this, unambiguous substitute names for use in electrical voice communication such as telephone and radio were adopted.

In 1927, the International Telecommunication Union (ITU) adopted the first International phonetical alphabet using geographic locations, like the French were using: Amsterdam, Baltimore, Canada, Denmark, Eddystone (a famous lighthouse on the Cornwall coast), … Xantippe is an odd one out: it is unlikely it refers to the village in western Australia, as it was only founded in 1925 and has a population of around 20. Also, at the start of World War II, Hanover was substituted by Havana.

During World War II, the British and Americans continued using their own versions though they began aligning due to their close cooperation: until 1956, both used Able, Baker, Charlie, Dog, Easy, … with a few small differences.

Seeking to align the phonetic alphabet amongst its members, NATO wanted to adopt the IATA/ICAO version, but proposed changes for C, M, N, U, and X. Especially N – Nectar versus November – caused substantial discussion. Finally, in 1956 both organizations adopted the final version, which is still in use today.